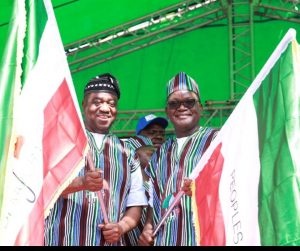 The Peoples Democratic Party, PDP in Benue State Monday, November 7th, 2022 flagged-off its campaigns for the 2023 general elections in the state.

Benue State Governor and leader of the party in the state, Samuel Ortom led his colleagues, Governors Nyesom Wike, Ifeanyi Ugwuanyi, Okezie Ikpeazu and Seyi Makinde of Rivers, Enugu, Abia and Oyo states respectively to kick off the campaign for the election.

In his brief remarks at the ceremony, which drew a mammoth crowd of supporters at the IBB Square, Makurdi, Governor Ortom reaffirmed that the PDP is poised to win all its elections in the state.

He said, “PDP looks good here in Benue State. We have no problem. By the grace of God, we shall win our elections. We have been winning, we will win and we shall win again.”

He expressed appreciation to his Governor colleagues for the support and solidarity they have shown to Benue State, stating that he would also reciprocate the support given to the state.

He further stated that “And that is why all of us, we have left everything we are doing in our states to come and give you support, to tell you that anything Ortom tells you to do, do it. It will be in the interest of Benue State.

“We came here and we have seen it. We went to commission five projects today. Look, this man is a gift to the people of Benue State.”

Governor Wike dismissed insinuations of problems in the PDP insisting that; “I don’t know of any problem, if there was a problem, we wouldn’t have come here. We have said support your people to win the election and I want to thank you for receiving us and we believe that God in his infinite mercy will help the people of Benue State to by returning PDP to power,” Wike said.

On his part, Governor Ugwuanyi stated that “I am here to support my friend, my brother, the performing Governor of Benue State, God’s own gift to Benue people, Governor Samuel Ortom and all our candidates.”

Also speaking, the Governor of Abia State, Ikpeazu maintained that “Let me say to the good people of Benue State. The issue at stake today is about Benue choosing life over death. We have seen the effort Governor Ortom has made to cry about your plight here in Benue State.”

Governor Ikpeazu insisted “Anybody who takes us away from our farms takes our lives away. Therefore, I will ask and urge the people of Benue State to follow Governor Ortom. I believe that Ortom is the Moses that will take Benue to the promised land.

“My prayer is that Benue people will be wise once again so that they will follow Uba (Rt. Hon Titus), and follow all our National Assembly candidates and indeed follow all our candidates in PDP. Vote PDP all the way,” he charged the teeming supporters.

In his goodwill message, Governor Makinde of Oyo State emphasised that “my only message to you, I have had the candidates, I have many of you speak here and say that Benue is PDP and PDP is Benue.

“Please I beg you in the name of God, do not be complacent, go out there, put in the hard work and deliver Benue to PDP. You have done it before and you will do it again. I wish you a successful campaign and by February-March 2023, you would have delivered Benue State and all your candidates to PDP,” he said.

The three Senators from Benue State, Senators Gabriel Suswam, Abba Moro, Orker Jev in their separate remarks expressed commitment to the PDP, noting that the party would clinch victory at the polls.

Acting State Chairman of the PDP, Hon Isaac Mffo presented the party’s flag to the Governorship candidate, Engr Titus Uba and his running mate, John Ngbede and the three Senatorial candidates of the party, Governor Ortom, Senators Suswam and Abba Moro and charged them to remain committed to the victory of the party at the polls.

On his part, the Director of the PDP Campaign management team, Dr. Cletus Tyokyaa said PDP is the dominant party in the state and would win all its elections.

In separate goodwill messages, Paul Ubwa for Zone A, Mike Mku for Zone B and Christopher Adaji who spoke for Zone C, Board of Trustees Members of PDP, Mrs Margaret Icheen who spoke for women, Engr Conrad Utaan for youths all pledged to mobilize support for the PDP to emerge victorious.

Party flags were handed over to the Governorship candidate of the party, Engr. Titus Uba and his deputy, Sir John Ngbede and the three Senatorial candidates, namely, Governor Ortom, Senator Suswams and Abba Moro by the acting state chairman of the party, Chief Isaac Mffo.