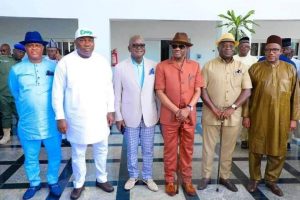 The People’s Democratic Party G-5 governors today said that they are ready for a genuine reconciliation with the presidential candidate of the party, Alhaji Atiku Abubakar.

The spoke through the Rivers State governor, Nyesom Ezenwo Wike who said that the integrity governors of the Peoples Democratic Party (PDP) are still open for reconciliation.

This stance, he maintained, is because of the conviction that every critical stakeholders in the party needs to be on board to ensure electoral victory for the party in 2023.

Governor Wike spoke in Bauchi when he led the PDP integrity governors on a solidarity visit to the Bauchi State governor, senator Bala Mohammed on Wednesday.

On the team of the integrity governors were governor Samuel Ortom of Benue State, governor Okezie Ikpeazu of Abia State and the governor of Enugu State, Ífeanyi Ugwuanyi.

Governor Wike declared that because the PDP integrity governors are the pillars of the party, they have kept their doors open and are ready for genuine reconciliation.

Governor Wike also explained the reason for the solidarity visit to the Bauchi State governor and said it is to ascertain how he was putting up with the challenges of his re-election for his second term.

“Our main motive of coming here is to give solidarity to our brother, the governor of Bauchi state, senator Bala Mohammed. And all we have discussed is to see how by the grace of God, being a gift to the people of Bauchi, he will win his election come 2023.

“So, all our discussion had to centre about his election and we are out to give him all the necessary support as our friend, our brother in the same political family.”

Governor Wike explained that the visit became necessary because whatever affects the Bauchi State governor will impact on them as well.

“By the grace of God, I know he has done well in Bauchi and the people of Bauchi State will still vote for him to come back for a second tenure.”

In his response, governor Bala Mohammed of Bauchi State expressed his delight over hosting the PDP integrity governors.

The Bauchi State governor, said it is no secret that he wrote to the national leadership of the PDP to express his concerns about perceived encumbrances as it affects his second term bid in the State.

He explained that this necessitated his meeting on Tuesday with the PDP presidential candidate, Alhaji Atiku Abubakar.

Governor Mohammed, who described the G-5 governors as brothers, joked that he was supposed to be part of them in their demand for equity, fairness, justice but he was excommunicated for reasons only known to the members of the G-5.

Despite that, Governor Bala said he had maintained regular contact with them and no day passes by without a call put out to, at least, one of them.

“In politics, you go with the people you share things in common. One thing that I appreciate with them is that they look at your challenges, they are not going back for second term, all of them.

“So, I am happy they are here. I will have the opportunity of confiding in people that I believe I can confide in with some of my worries, my fears, my apprehensions and that of my State. As PDP members, we are of the same family. I will see you as my comrades in this journey of life.”