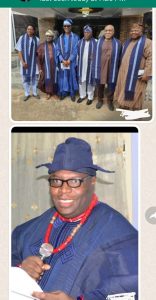 According to him, any society that is serious about development must therefore educate its citizenry as it would bring about economic growth and poverty alleviation in the country.

Sofolahan in his welcome address at  inaugurated of the Board of Trustees of the Victory College Ikare Akoko Old Students Association held at Solton Hotels and Suites Akure said education is the only answer to national development, unity, peace and security in the country.

He however noted that the journey of the National Association of the Victory College,  Ikare Akoko started some years back saying that he must appreciate the forebears of the Association for their steadfastness towards the sustenance of the body.

The Immediate Past General Secretary of VICOSA Pastor Ganiyu Saliu was equally on the ground as an Ex-officio and one of the program coordinator.

To our Board of Trustees, Sofolahan said “you have been carefully selected into this team having considered your wealth of experience and the governance acumen that you have over the years.

“Let me salute the courage of our founding father, Archdeacon L Lennon for the foresight towards establishing the college. You will agree with me that, Victory College Ikare, being our Alma Matta has contributed tremendously to the growth and overall development of the students over the years.

“We have equally identified some “low hanging fruits” programs that we can work on within the college that will bring about the glory and honor to the college”, he said.

Gracing the occasion were the Akure Chapter of Victory College Ikare Akoko Old Students Association under the Leadership of Octogenarian Chief Oloruntuyi while the College Principal, Evangelist Adebayo Ajimuda delivered report on the State of the  College.

Victory College Ikare Akoko in February 21st 2022 celebrated the college 75th Anniversary of her existence as the only College in the entire Akokoland.

The college was formed by a Jamaican Missionary that visited Nigeria Archdeacon Lennon and his wife and ever since the beginning of the college, a lot of students have passed through the college including  Chief Adebayo Adefarati, the one time Governor of Ondo State, Senator Kayode Ogunleye, Nigeria First Republic Senator, Chief Aret Adam, Former Nigeria National Petroleum Corporation Group Managing Director, Chief Gani Fawehinmi, the erudite Lawyer and Senior Advocate of the Masses. Rear Admiral Michael Okhai Akhigbe.