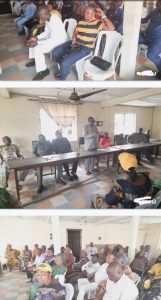 Chieftains of the People’s Democratic Party, PDP, in Akure South today met to find a last solution to the ongoing crisis rocking the party in the local government.

The meeting which was held at the party secretariat in Akure at the instance of Barrister Eyitayo Jegede SAN had the the attendance of Honourables Tony Ala, Dele Faboro, Comrade Gbenga Jegede, Alhaji Ganiyu Ogbera, Layo Falohun, Elder Omoomo, Tayo Egunjobi, chairman of the party, Mr. Busuyi Oladimeji, and other party leaders across the eleven wards in the local government.

In his speech, Barrister Eyitayo Jegede pleaded with all the aggrieved factions of the party in Akure South to bury their anger so the party can record victory at all levels at the forthcoming general elections.

Jegede made it known that the party needs peace at this critical time so that what happened in Ekiti state as a result of a sharp division of members and leaders won’t occur in Ondo state.

According to him, it is time for every aggrieved member of the party to forget anger and embrace peace. He said it couldn’t be ruled out that some people would be angry over the outcome of the last primary elections in May, 2022.

He begged everyone to shun politics of bitterness, saying such will not help the party in 2023.

He also pleaded with aggrieved persons to forget the plans not to work for some particular candidates at the election, noting that his joy is to see that all the party’s candidates from the presidency to the state assembly win in 2023.

In their speeches, Honourables Tony Ala, Dele Faboro, Layo Falohun and Alhaji Ganiyu Ogbera said they are ready to work with candidates in the other camp for the sake of the party, Alhaji Abubakar Atiku and Barrister Eyitayo Jegede.

They however warned that nobody should attack members of their group like some yet to be identified political thugs attacked and stabbed Hon. Layo Falohun some weeks back.

They however urged Barrister Eyitayo Jegede to compel candidates from the other camp to attend their group’s meeting and beg for support instead of bragging that they don’t matter in the forthcoming general elections in Akure South.

Others who spoke were PDP local government youth leader, Ajayi Olorunlogbon, assistant PRO, Gbenga Alafe, Hon. Sunday Somi (Koko), Soji Omojagbe, Julianah Asekere, Kikelomo Oladunmoye, Stella Oluwatuyi, Ayo Omoloye, Tayo Abisola, Margaret Johnson, Hon. Akarakiri, Elder Omoomo. They expressed their disatisfaction with the way a particular candidate of the party in the local government has been insulting and oppressing their camp as if they do not matter in the election.

They warned that they won’t work with the said candidate if she continues with her threat to work against Alhaji Abubakar Atiku at the election just because their own presidential aspirant failed to get the party’s ticket in Abuja during the last national convention.

Some of them mentioned how a particular leader in their ward brought thugs to attack them in his own house with the plan to hijack the money released to them for logistics during the last by-election in Akure federal Constituency.

They also mentioned how the particular leader brought thugs to attack them at the residence of Otunba Omolafe Oluwateru during the last selection of adhoc delegates.

They complained how a group of people asked their supporters to run away with half of the money released for logistics during the February 23 by-election in Akure North and South.

Also, they showed their anger over the way Hon. Kemisola Adesanya went with her supporters to the Dome to celebrate the defeat of Barrister Muyiwa Adu immediately after the February 23 by- election

They also accused her of organizing a valentine party at her residence on the day the campaign of Barrister Muyiwa Adu was flagged off.

Also speaking, Comrade Gbenga Jegede and Mr. Busuyi Oladimeji urged PDP members in Akure South to have a forgiving spirit so the party can achieve success in the next election at all levels.