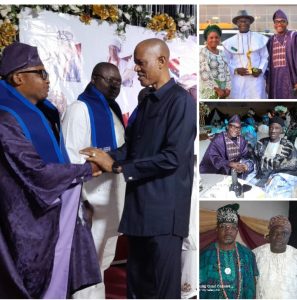 Former Southwest vice chairman of the PDP, Dr. Eddy Olafeso, a chieftain of the party in Akure South, Barr. Muyiwa Adu, a former House of Assembly aspirant, Aare Abiodun Oluwarotimi, a former member of the House of Representatives, Hon. Abayomi Sheba and many others on Sunday, December 11, 2022 received awards of excellence for their contribution to humanitarian development in the country.

Apart from these people, two traditional rulers were also awarded for their supports to the growth of their communities.

The awardees were also inducted into the Oil Africa Hall of Legends by Chief Olusola Oke SAN at the Oil Africa Leadership Awards held at the Dome in Akure.

Speaking in his welcome address, Publisher of Oil Africa Magazine, Dr. Akin Egbuwalo, said that the few awardees were selected from a long list of nominated candidates as a result of their dedication to humanity and selfless service in the country.

Egbuwalo continued that quality leadership is where quality principle becomes a basis for guiding, empowering and supporting the constant pursuit of excell. “These noble men and women we are celebrating today have measured up and raised the bar on the direction. They have all done greatly well in their various field of endeavors” he added.

He pressed further that for the awardees, their legendary work has further spoken for them as they were honoured with different categories of awards and subsequently indicted into the Oil Africa Hall of Legends.

He noted that by the induction, the awardees have automatically become ambassadors and stakeholders in the Oil Africa Leadership project.

In his speech, the chairman of the occasion, Chief Olusola Oke SAN lauded the organizers,adding that the event has improved more than ones held in the past.

According to him, the award is a reward of honour, noting that it is important for legends to be celebrated while they are alive and not when they are dead.

He noted that those who are due for honour should be given the testimonials of their good deeds while they are alive.

He congratulated the eleven awardees who made it to the final selection by the organizing committee.

Sola Oke urged the awardees to see the awards as a challenge for them to do more, stressing that the society is today going through a lot of problems and people like the awardees need to rise up to the task of putting things right.

In his brief lecture, Vice Chancellor of McPherson University, Prof. Francis Igbasan who spoke on the effects of oil politics on the oil producing communities and the nation’s economy, said that the issues around oil has led to corruption which has threatened the economic growth of the country.

He added that the issue surrounding oil in the country has enhanced kidnappings and as well made some governors to be irresponsible.

Igbasan berated the governor of the state, Rotimi Akeredolu for not doing well in repositioning the oil producing communities in the state.

He however said that the people of the state are waiting to see how the governor will spend the huge billions that had been released to him from oil derivation.

He blasted state governors for always keeping mute about all the billions they had been receiving from the federal government as derivation for Niger Delta states.

He however lauded the governor of Rivers state, Nyeson Wike for exposing the governors that they had received part payment from the federal government last week.

How also urged state governors to use the money they have just received from oil derivation judiciously.

Reacting, governor of Ondo state, Rotimi Akeredolu who was represented by the commissioner for information, said Ondo state only got N19.7b from the federal government as oil derivation and not the speculated N90.7b.

The governor said he met debts of billions of naira and salary and arrears when he resumed in 2016 and it is this money he has been using to pay.

According to the governor, Ondo state needs help and it will continue to be getting help.