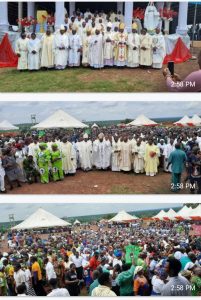 A few days ago, the Benue State Governor, Samuel Ortom received a resounding and overwhelming ovation from thousands of Catholic faithful who converged on Sesugh Maria Pilgrimage Centre, Ayati, Diocese of Makurdi, for the Provincial Eucharistic Congress of Abuja Ecclesiastical Province.

The ovation accorded Governor Ortom was called for by no less a personality and authority than the Metropolitan Archbishop of Abuja Province, His Grace, the Most Reverend Ignatius Ayau Kaigama.

Archbishop Kaigama eloquently commended the Governor as a man who has demonstrated uncommon love and commitment to the security of not only his people but also of all other Nigerians.

He acknowledged that Governor Ortom has been outstanding in speaking up against the sustained attacks and killings of innocent people in some parts of the country, which Benue State too has continued to experience.

“Your Governor, Samuel Ortom is famous for standing up for the rights of people who are being killed and attacked for no reason, so he is famous.

“This is one distinctive aspect of his administration; being able to stand up with audacity to even challenge those authorities concerned that they should do something about protecting the lives of people,” the Arcbishop stated.

The Archbishop further said he was on the same page with Governor Ortom over his calls for the security of human lives, urging him to sustain the patriotic advocacy.

“Why should they kill anyhow? This is so terrible. Governor Ortom is not with us here but please convey to him that he should talk louder,” the Archbishop stressed.

He thereafter asked the congregation to give the Governor a resounding applause of commendation.

The Archbishop had earlier called for a moment of silence in honour of the two Catholic Priests, Reverend Fathers Joseph Gor and Felix Tyolaha as well as 19 parishioners killed by marauding herdsmen in 2018 and prayed for the repose of their souls.

He congratulated all pilgrims present at Ayati representing the Dioceses of Lafia, Otukpo, Lokoja, Katsina Ala, Makurdi, Gboko, Idah and Abuja, and also prayed for God’s blessings upon them.

Archbishop Kaigama stated that as people of faith and hope, Christians should believe that with sustained prayers of the Church, the bloodbath being experienced in the country from evil forces will surely be defeated.