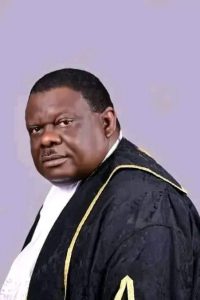 Federal High Court sitting in Abuja, Wednesday adjourned to October 26,2022 has granted a motion filed by a former Attorney General of the Federation, Chief Michael Kaase Aondoakaa SAN for extension of time to file his counter affidavit and written address to the APC’s motion on notice filed on July 8th, 2022 and his written address to the preliminary objections of the suspended priest, Hyacinth Alia, which was filed on July 8, 2022,as well as plaintiffs further affidavit and reply on point of law to Alia’s counter Affidavit to the originating summons.

It will be recalled that Chief Aondoakaa, SAN, through his lawyer, C.I. Okpoko, SAN, had on September 1,2022, withdrew some of the process he had earlier filed before the court and drew the attention of the court to his pending motion for extension of time to regularize the processes he had withdrawn.

When the case came up on Wednesday, Counsel to the former AGF, C.I Okpoko, SAN, drew the attention of the court to his motion on notice for extension of time to regularize his processes.

The motion was supported by a 22-paragraph affidavit and a written address.

He moved the motion.

Counsel to Alia, Sunday Ameh, SAN, who had earlier opposed the motion withdrew his objection to the motion.

Counsel to the APC, Matthew Burkaa, SAN, also did not oppose the motion,while counsel to the Independent National Electoral Commission, INEC, the third defendant in the suit was absent in court.

The Presiding Judge, Justice Ahmed Mohammed granted the motion as prayed and gave the defendants three days with effect from tomorrow, Thursday, to file their counter.

Justice Mohammed adjourned the matter to October 26,2022, for parties in the matter to adopt their process in the suit and also ordered that hearing notice be served on INEC.