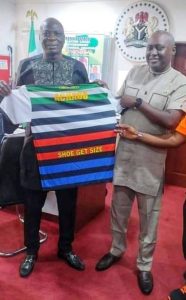 The Interim Management Committee, IMC, says that the management of Lobi Star Football Club, Makurdi under the leadership of its Chief Executive Officer, Mr. Dominic Iorfa had no hands in banning Aper Aku Stadium from being used for the forthcoming Nigeria Professional Football League.

Recall that an unpopular online medium had yesterday reported that Mr. Iorfa had colluded with NPFL Stadium Inspection team to secure a ban on Aper Aku Stadium in Makurdi just to make gains on the renovation which the state government may commence any moment from now.

But our correspondent covering the IMC gathered from the authorities that the ban placed on Aper Aku Stadium was to ensure safety and wellbeing of players and football officials in the country.

According to a management official of the IMC who spoke under the condition of anonymity, there was no time Iorfa struck any deal with stadium inspectors to impose the said ban on Aper Aku.

Also, our correspondent spoke with some Lobi Star players who lauded Iorfa for making their welfare his top priority since his return as the VC/CEO of the Benue state-owned football club.

The players said it would be wrong for anyone to accuse Iorfa of staging the ban on Aper Aku Stadium so as to take away Lobi Star from the sight of their fans at home and also maltreat them (players) and club staff.

Speaking on why the banned Aper Aku Stadium was approved for the Women’s League, the official said that the NWFL is not that stressful like the NPFL.

“How many people in Nigeria pay attention or watch Women’s League? This is why we allowed Aper Aku to host their matches. But for the NPFL, we have placed a ban on Aper Aku Stadium and we have advised the management of Lobi Star to look for an alternative stadium to host their home matches” he added.

Some Benue state government officials that were contacted by our investigators over the allegation that Iorfa staged the ban on Aper Aku Stadium in order to use the renovation of the said stadium to enrich himself by increasing the budget of the club and also bring in his own contractor to handle the renovation stated that the allegation was untrue, stressing that there in no way the club’s CEO could have influenced the decision of the government on who handles the planned renovation of the stadium.

The officials also said that the government will not believe the allegation since there has never been any record that Iorfa had inflated the budget of the club since he assumed duties as the VC/CEO.

On the allegation of match fixing made against Iorfa, recall that Nigerian Concord Newspaper had reported how the trio of Paul Tion, Austin Tyowua and Gabriel Ogwuche sent a message to an official of the dissolved League Management Company few months ago, accusing the Lobi Star CEO of match fixing which is a very serious offence.

The official however asked them to bring a concrete evidence to substantiate their allegation but till now, no evidence has been presented before the dissolved LMC.

Findings showed that the three accusers refused to send in any evidence because the dissolved LMC’s official asked them to make their petition official by sending it with their names and addresses.

Meanwhile, an official of the IMC who spoke with our correspondent this morning said that the league has finished over six months and the football body has not made any allegation of matches fixing against Iorfa.

According to the IMC official, the the Auwalu Baba Jada match fixing scandal doesn’t mean that Lobi Star or any other club was involved.