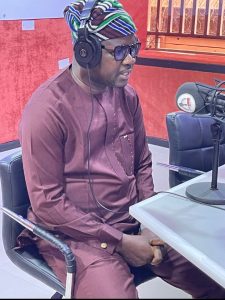 Special Adviser to the Benue State Governor on Media and Publicity, Mr Terver Akase says the President Muhammadu Buhari-led Federal Government is frustrating the efforts of Governor Samuel Ortom to access funds meant to offset the backlog of salaries and pension of state and local government workers.

Speaking on Monday, September 12, 2022 when he featured on Brothers FM 90.5FM current affairs programme, “Burning Issues” the Special Adviser berated the Federal Government for victimizing Governor Ortom on critical issues of governance such as security and the welfare of the people.

Mr Akase expressed displeasure over the insensitivity of some Benue politicians whom he noted were collaborating with the Federal Government to play politics with the welfare of workers and retirees, saying such conspirators were enemies of the state. He described as punitive, the decision of the Federal Government to block Benue State Government from accessing the N41 billion loan approved by the State House of Assembly.

He stated that the Governor is not relenting on his efforts, as he remains committed to the welfare of the people, disclosing that payment of salaries, pensions and gratuity was ongoing, despite the frustration faced by the State Government.

He challenged the main opposition party in the State, the APC to be more constructive in criticizing policies and programmes of the Ortom administration, rather than relying on falsehood, campaign of calumny and mischief.

Commenting on the ongoing strike by the Academic Staff University Union (ASUU), Mr Akase described the situation as unfortunate and called on the Federal Government to properly fund education and honour its agreements with labour unions.

He reaffirmed the belief of Governor Ortom in fairness, justice and equity, saying the Governor has placed education on the front burner, citing the placement of salaries of Benue State University academic and non-academic staff on first line charge.

Reacting to the incessant media attacks on Governor Ortom by the Presidency, the Special Adviser said the President’s media handlers have tagged the Governor as an enemy because of his position on critical national issues, saying the Governor was speaking the minds of all Nigerians.

He maintained that the attacks would not stop the Governor from speaking the truth as he has chosen to be the voice of the voiceless and a social crusader against injustice and inequality, challenging the President’s media handlers to take the Governor’s messages and redeem the image of the President rather than making him the subject of attacks.

Mr Akase noted that Governor Ortom’s foreign trips are yielding positive results as his bilateral relations with people have attracted foreign investments in the state, pointing out that such initiatives would improve the state’s economy and by extension the lives of the people.

While refuting allegations by the opposition that the State Government has received 17 billion Naira without accounting for it, the Special Adviser challenged the opposition to bring forth evidence of financial impropriety against the Governor.

He reaffirmed that the financial records of the state were open to public scrutiny and further challenged those interested to go to the Ministry of Finance and other relevant government agencies.

Commenting on preparedness for next year’s elections, Akase said the PDP has fielded credible candidates for all positions, unlike the opposition APC which failed to conduct credible primaries.