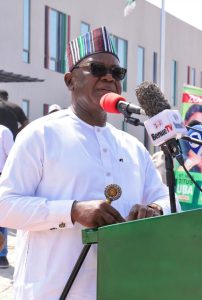 Governor Samuel Ortom of Benue state will be contesting the Zone B senatorial election in February, 2023. Today, we bring you some of his achievements as governor so you can know how qualified he is to be senator:

AGRICULTURE: This is one area where former president Olusegun Obasanjo has always been lauding Governor Ortom as the best. Recall that Baba Obasanjo who is known for his attacks on non performing chief executives had lauded Ortom on several occasions where he described him as the best governor in the area of agriculture.

Who can know better than Obasanjo himself in the area of agriculture as a big time farmer. Apart from Obasanjo, several local and international agencies including foreign governments have shown interests to partner with the Benue state government to boost agriculture. Can anyone, agency or country want to partner with failure?

Still on agriculture, the governor whom they say is a failure was able to release N500m for construction and equipping of laboratory at the Akperan Orshi College of Agriculture, Yandev, and rehabilitation of Agric Training centres in Mbatie and Otobi. He evolved a new policy for procurement of fertilizer at highly subsidised rate of 38% to Benue farmers.

He facilitated N2 billion CBN Anchor Borrowers Scheme agricultural loans for disbursement to Benue farmers while he also introduced land clearing and dry season farming. He also Signed MOU with Bank of Industry to give N2 billion loans to farmers at 5% interest rate in addition to N1 billion available facility from CBN for the same purpose

There was commencement of work after signing of agreement with Torra KFT for the completion of the Wannune Tomato Factory which is aimed at creating hundreds of jobs for the people? Is that too a failed project.

INFRASTRUCTURE: One needs to inform the public that the governor has started and completed massive road construction as well as infrastructural projects more than almost all his colleagues from other states.

If anyone says Benue isn’t developed then what of the governor’s achievements in the award and construction of Obagaji-Okokolo-Abian-Agagbe road 43km, Ikov-Utange-Mbagwaza-Mbagba-Lessel road with spur at Hiltom 55km, Otukpo Icho-Odudaje-Aondoana road 21km, Makurdi-Yogbo-Udei-Udei branch road 52.27km, Mobile Police Barracks – Yaikyo – Apir road 24km, Origbo – Imande – Akpur – Gbajimba road 40. 397km? How can a state be more developed than this?

Let us also talk of the release of a whooping N300 million by the governor for the completion of Benue State House of Assembly complex as well as the Re-roofing and rehabilitation of old Assembly complex, Partnership with NNPC for the establishment of Ethanol project in the state, fixing 33 rural roads and electricity projects across the state.

EDUCATION: Governor Ortom had ensured 740 ongoing construction, renovation and other projects in primary schools in the 23 local government areas of the state following the release of N7.6 billion.

He also ensured an increase of carrying capacity of the university from 4, 655 to 6, 000 and as well obtained full accreditation for seven courses.

What does a state need to be developed again with the commencement of payment of salaries of BSU Technical School Staff after five years of non-payment of salaries as well as re-training of 10,000 primary and 6000 secondary school teachers?

He had also ensured the construction and massive renovation of the LGEA Primary School, Utange Central by Governor Ortom? Is that one too an underdevelopment?

What of the construction of new and renovation of classrooms, dormitory, library, administrative block, over head water tanks and reinforced perimeter fence at the School for the Special Needs in Aliade, is that one a failure too?

Aokpe in Okpokwu has also felt the Governor’s impact as 3 classrooms blocks have been completed at St. Patrick’s Primary School while the Governor also offered financial assistance to the Aokpe Pilgrimage Centre to upgrade its facilities and directed the immediate sinking of two boreholes at the centre.

What of the massive renovation and reconstruction works at the Mama Abayol orphanage in Makurdi which Governor Ortom had completed?

At the Industrial layout, the Fire Service Station has been equipped, renovated and overhauled while the Police Station also within the Timber Shed Market along Naka Road has been reconstructed and refurbished to enable it provide security effectively.

In the Urban Renewal initiative of Government in Gboko Local Government, major streets such as J. S. Tarka Way, Gondo Aluor Way, Ahmadu Bello Way and Capt. Downes Roads amongst others have been reconstructed.

In Katsina-Ala, many of the streets have been tarred and others undergone drastic repairs. Other road interventions include the 36.73 KM Wannune Ikpa -Igbo road which is ready for commissioning. Oshigbudu-Obagaji Road in Agatu Local Government have also been completed awaiting commissioning. In Otukpo, several township roads are wearing new looks of re-construction and massive repairs of others with asphalt finishing.

Within Makurdi metropolis, many Township roads including the Mobile Barracks-Adeke-Welfare Quarters-Yaikyor – Apir Roads have all received intervention from the administration with the renewed commitment of the Ortom administration to bring development to every section of Benue.

Benue has developed with the establishment of Primary Health Care Board and constitution of its board courtesy Governor Ortom.

Benue under Ortom is the first state in the country to meet requirements for accessing the 2015 Round of MDGs/SDGs Conditional Grants in Nigeria. Ortom was the first Nigerian governor to ensure the payment of N1.2 billion counterpart funding to access a total of N2.4 billion for construction and equipment of Modern Primary Health Centers in 33 communities across the state through the MDGS-SDGS. This led the United Nations to invite the governor to address one of the side events at the 2016 United Nations General Assembly on SDGs in the state.

On health, Ortom approved the purchase of ambulances for health centres across the state, provision of motorized boreholes and public toilets under SDGs and its partnership with DFID in parts of the state, Construction of Skills Acquisition Centres in Apa-Agila, Ado; Makurdi and Gbajimba in Guma LGA as well as the Construction of Orange Packaging Plant in Ushongo Town, Ushongo LGA

On the prompt payment of workers salaries and pensions, Governor Ortom is one of the best in Nigeria except for December 2020 when the Court garnishee order delayed payment for fee days.

SECURITY: The governor has done more than anyone to ensure the safety of his people including their properties.

Governor Ortom put his life as well as his reelection on a danger list by standing his ground that he would stop fulani herdsmen from killing innocent Benue people, and he was eventually showed the way out of the APC as a result of this.

Rather than getting weary, Ortom stood firm and said that his second tern was not important like the lives of his people. He said in many occasions that he was ready to lose his own life as well as his seat if that would ensure total freedom for Benue people in the hands of fulani killers.

The governor was forced not to sign the Anti Open Grazing Law but he did despite his idea of the wars that would be waged against him by the powers in Abuja. He signed the Law and refused to repel it even when his life was in jeopardy.

One can easily say that the Platinum Tribune award as well as the UN and the Pilot newspaper awards and many others which the governor had got were products of his stands on ensuring the safety of Benue people and their properties.

MEDIA AND ICT: To develop Benue in this area, Governor Ortom collaborated with the National Information Technology Development Agency, NITDA for the establishment of Benue State Information Technology Development Agency, BITDA and formulation of an ICT for the state. He ensured the procurement and installation of new transmitters at Radio Benue and at Idekpa sub-station which has resumed transmission while reconstruction of Katsina-Ala station is ongoing.

He also approved the Partnership with the Federal Ministry of Communication Technology and the Rockefeller Foundation for training of 1,500 unemployed youths from the 23 local government areas of the state on how to access online jobs as well as the provision of land to the Nigerian Communication Commission for the establishment of Digital Institute in Benue State.

He ensured the restoration of water supply in Otukpo and Katsina-Ala with the payment of over N1 billion to the contractors and also provided of three motorized boreholes and construction of drainages at Government Girls College, Makurdi.