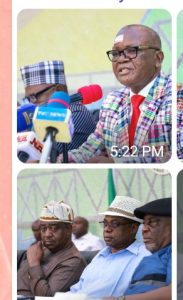 Benue state governor, Samuel Ortom, says the All Progressive Congress which is the major opposition party in the state has lost relevance as a result of the flawed governorship primaries which produced the embattled Reverend Father Hyacinth Alia as the flag bearer of the party in the next year’s general elections.

This is just as the governor blamed the lingering crises in the Peoples Democratic Party, (PDP) on the poor management of the Presidential convention and post-convention outcome.

Governor Ortom stated this on Monday, September 19th, 2022 in his opening remarks at the PDP State expanded caucus meeting held at the Benue Peoples House, Makurdi.

While stating that due process was followed in nominating a PDP gubernatorial candidate in the State, Governor Ortom said the APC, the main opposition party in the state has continued to lose relevance with a flawed primary election, which he noted has led to its disintegration.

He said the party’s leadership has poorly managed the outcome of the presidential party primaries which has defied any solution.

Governor Ortom maintained that as one of the party’s stakeholders who believe in justice, equity and fairness, he had openly expressed his concerns, stating that he also made frank suggestions on how the issues could be addressed.

He however noted that his observations on how to resolve the issues were not considered and rather, the internal crisis was unfortunately left to fester.

The Governor, therefore, urged the leadership of the party to do more and build confidence to resolve the internal crisis, emphasising that he remained firmly committed to the party’s electoral victory in next year’s polls.

According to the Governor, the main agenda of the PDP remains how to rescue the country from the APC’s misrule, which he noted has plunged the nation into multiple socio-economic problems that must be tackled holistically to redeem the nation.

He assured that ahead of next year’s general election, the PDP in the Benue State remained united and was focused on clinching victory in all positions.

Governor Ortom stressed that as the leader of the party in the state, he would not succumb to any form of blackmail, but rather continue to work assiduously for the party’s resounding victory in the polls.

The Governor also commended all former PDP guber aspirants as well former aspirants to other elective offices, whom he noted have all remained committed to working for the party’s victory despite losing out at the primaries, urging them to sustain their support.

He pledged to continue carrying all stakeholders along in the party’s decision-making, saying the PDP as a political party, provides a platform for all its members to have equal opportunities to contribute to governance.