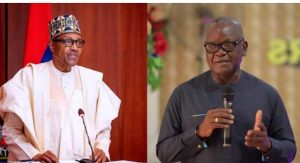 The governor of Benue state, Chief Samuel Ortom, says Garba Shehu and other handlers of President Muhammadu Buhari are deceiving the president about the bad security situation of the country because of their meal tickets.

Governor Samuel Ortom said this in a press statement signed by his Chief Press Secretary, Mr Nathaniel Ikyur, to react to a statement credited to Garba Shehu that he was not sincere in his alarms over the security situation of Nigeria.

In the statement, Governor Ortom said: “Garba is a man whose loyalty is for sale to the highest bidder. He sings in high praise of the President today because that is his current source of livelihood. He will be the first to go against the President once the tables turn. He has done that before with other prominent Nigerians whom he served. A man who betrays his former benefactor for a new pot of porridge does not possess the moral right to question a patriotic leader like Governor Ortom.

“Shehu blew the opportunity to prove me wrong that I had raised a false alarm about the worsening security situation in the country. Hundreds of our citizens are held captive by terrorists in the forests. I expected Shehu to tell Nigerians what efforts the Federal Government has made to release the hostages.

“Was it a false alarm from me that led to the terrorists’ attack on the convoy of President Buhari in his home state Katsina? Or was it a movie acting when terrorists broke into Kuje Correctional Centre right in the heart of Abuja, the Federal Capital Territory and released their colleagues?

“It is unfortunate that till date, no officer has been arrested or questioned for the lapses and clear cases of complicity by the security operatives attached to the Kuje facility. There are reports of over six jail breaks in the last seven years under the Buhari administration. If that is not a crying shame of failure on the part of the Presidency, we wonder what else qualifies as failure.

“It is sad and unfortunate that the likes of Garba Shehu have zero sympathy for the families of those being killed daily by Fulani terrorists. As long as their meal ticket is secured, they tell Mr President to go to bed, that all is well with the country.

“Each time I speak about the dreadful manner the Muhammadu Buhari administration has handled the security situation in the country, his media aides and handlers do come out attacking my personality instead of addressing the issues I raised.

“If the Presidency assumes that I am wrong about my statements regarding the failure of the present government to tackle insecurity, I urge them to hold a referendum to get the feelings of Nigerians towards their ineptitude, complicity and clear lack of commitment and sincerity in protecting the people.

Governor Ortom also took a swipe at Shehu when he branded him as an “opportunistic politician.”

“Shehu should be told that I rose to become a Local Government Chairman, State Publicity Secretary of National Centre Party of Nigeria; State Treasurer of All People’s Party, State Secretary as well as State Deputy Chairman of the Peoples Democratic Party, PDP, National Auditor of PDP, Minister of the Federal Republic and now a two-term Governor. If Shehu thinks it is easy to win elections, he should test his popularity by contesting a Councillorship position in his local government area.”