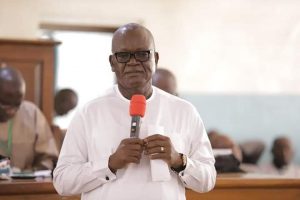 Benue State Governor, Samuel has acknowledged the positive contribution of the NKST Church in the health and education sectors.

Governor Ortom who was addressing the NKST Synod at Mkar in Gboko, Tuesday November 15th, 2022 said apart from propagating the gospel, the Church has also rendered tremendous social services in the health and education sectors which has added value to the state.

He particularly noted that the impact of the Church in evangelization and social services has offered hope for the people as well as good character formation.

Governor Ortom told the Church leaders that he was leading the state at a challenging moment of insecurity, stating that despite the travails, he has played his role even as a lone voice but will not be deterred in seeking justice for his people.

According to the Governor, Christianity remains his immediate constituency and would not do anything to jeopardize their interest in next year’s election.

While affirming his long standing relationship with the Church, Governor Ortom appreciated the prayers of the Church for his administration in the midst of challenges and solicited their continued support.

The Governor intimated the Synod of his aspiration to represent Benue North-West Senatorial district in the National Assembly in the 2023 elections and sought their prayers to succeed.

He also appealed to the Synod to pray and support Engr Titus Uba to take over from him as the next Governor, stating that Uba who is the Speaker of the State House of Assembly was instrumental to the passage of people oriented laws, pointing out that “Uba has the character and willpower to sustain the quest for the protection of lives and property of the people of the State.”

The Governor also announced a donation of 30 Million Naira to support the NKST Church in the execution of its projects on the secretariat auditorium in Mkar and the Campground in Amaafu, Katsina-Ala Local Government Area, pledging continued support of his administration to the Church.

He also announced the approval for the procurement of computers and other Information and Communication Technology, ICT gadgets to facilitate the accreditation requirements at the University of Mkar.

Governor Ortom also assured the NKST Synod that there will be speedy processing and issuance of the Certificate of Occupancy and other title documents for the Camp Ground at Amaafu.

The Peoples Democratic Party, PDP Deputy Governorship candidate, Sir John Ngbede who also accompanied the Governor and gave a brief remark on behalf of the PDP Governorship candidate, solicited prayers from the Church to emerge victorious at the polls, pledging that if elected, they will remain focused and contribute to moving the state forward.

Earlier, the President of NKST Synod, Reverend Dominic Anza extolled Governor Ortom’s firm commitment in standing for the protection of lives and property of his people without compromising.

According to him, the NKST Church was solidly in support of Governor Ortom’s initiatives towards restoration of security and peace in Benue and assured the Governor of prayers for God’s protection and fulfilment of his aspirations.

The Synod President also expressed appreciation to the Governor for his unflinching support to the NKST Church, pointing out previous donations the Governor gave to the Church for its development and work of evangelization.

Vice President of the Synod, Reverend J.T Adure led the Synod to offer prayers for Governor Ortom in his leadership of the state.

Governor Ortom visited the Tor Tiv, Prof James Ayatse where he met behind closed doors with the traditional rulers at the Tor Tiv Palace.

Governor Ortom was accompanied by his Chief of Staff, Dr Tivlumun Nyitse, Zone B Senatorial campaign Director, Hon Mike Mku as well as other close aides.