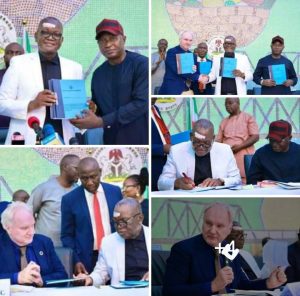 Benue State Governor, Samuel Ortom has assented to the law for the establishment of a Peacebuilding and Reconciliation Commission in the state.

This was contained in a press release signed by the governor’s Chief Press Secretary, Mr Nathaniel Ikyur.

Governor Ortom gave assent to the law on Wednesday, September 21st, 2022 which marks this year’s International Day of Peace with the theme “End Racism. Build Peace.”

The United Nations Resident and Humanitarian Coordinator in Nigeria, Mr. Matthias Schmale, personally attended and participated in the ceremony which took place in the new Banquet Hall of the Benue Peoples House, Makurdi.

Governor Ortom in his remarks before assenting to the law, drew the attention of the United Nations to the security challenges the state is facing leading to humanitarian crisis.

The Governor called for the United Nations’ intervention saying, “All I ask is that the UN presence in Benue should go beyond the humanitarian needs, which I know are short term and immediate.

“We need you to advocate for the promotion and protection of our rights as a people; advocate for the observance of the rule of law, to ensure equity and justice for all Nigerians,” Ortom said.

The Governor also told the United Nations Resident Coordinator that Benue has suffered incessant attacks by rampaging Fulani herdsmen leading to the displacement of more than 2 million people and the killing of over 5,000 persons since 2011.

He said, “Your Excellency may wish to kindly note that Benue State is passing through a serious humanitarian crisis at the moment with over 2 Million Internally Displaced Persons (IDPs) some of whom are living in deplorable conditions in IDPs camps while others have been absorbed into host communities where the IDPS sought refuge.

“May I also draw the kind attention of the United Nations to the imbalance in the donor agencies’ interventions in the country as such interventions seem to be tilted more to the North-East to the extent of literally ignoring the crisis bedevilling the North Central/Middle Belt region.

“Sadly, we have been agitating for a North Central/Middle Belt Development Commission similar to the one created for the North East by the Federal Government to no avail.

“It is my hope and prayer that the UN organisation will strengthen its efforts toward this matter and push for much more coordinated donor support not just for the North Central (Middle Belt) and also for the creation of the North Central Development Commission at the Federal level.”

The Governor maintained that his administration has made efforts to consolidate partnerships for the sustainable development of the state.

“Our areas of special focus include good governance, security of lives and property, promotion of agricultural development, strict adherence to and respect for the rule of law, collaborations and partnerships for meaningful development, and upholding fairness and equal opportunities for all through Government policies and programmes,” Governor Ortom stated.

Governor Ortom appreciated the partnerships that his administration has had with the UN through the United Nations Development Programme (UNDP) and other sister agencies on strengthening peacebuilding architectures in the state.

The Governor pointed out some of the legacies of the partnership to include, the convening of a state level stakeholders’ engagement and peace dialogue, technical guidance towards the drafting and passage of a Peace Commission Bill among others.

He however warned that the enactment of the Peacebuilding and Reconciliation Commission Law does not repeal other existing laws meant for the security of lives and property of the people, including the Open Grazing Prohibition and Ranches Establishment Law and called everyone to obey the laws.

The UN Resident and Humanitarian Coordinator, Mr Schmale in his remarks, acknowledged that Nigeria is living through uncertain times with ongoing security dynamics in almost every corner of the country that negatively impact our lives and livelihoods.

He said, “If we accept that there is no peace without development and no development without peace, the UN would also like to use International Peace Day to ring the alarm bell on the need for transformative change in Nigeria.”

While commending Governor Ortom, and the entire Government of Benue State for the enactment of the Peace Commission Law, Mr Schmale, noted that “the Benue State Peace Commission will be a key mechanism for coordinating peaceful responses to conflicts as they arise,” which according to him, constitutes broader level peace entities that form the foundation of Nigeria’s overall peace architecture.

Presenting the Bill for the Governor’s assent, Speaker, Benue State House of Assembly, represented by Deputy Speaker, Christopher Adaji said the state legislature was prepared to enact more laws for good governance, describing the passage of the Peace Commission Bill as historic.

Earlier, the Special Adviser to Governor on Sustainable Development Goals and NEPAD, Professor Magdalyne Dura, acknowledged the support of the UN and the leadership vision and foresight of Governor Ortom, stating that it was symbolic that the signing of Peace Commission Bill into Law was taking place on International Peace Day.