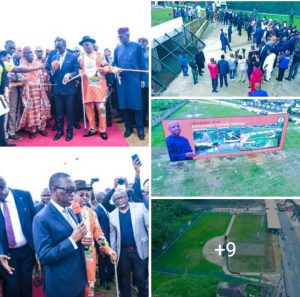 Eighteen communities spread across three local government areas of Akwa Ibom State, Tuesday celebrated respite from the plague of perennial flooding of over twenty years, as the state government inaugurated the 10Km IBB and Environs Flood Control Project as part of activities to mark the state’s 35th anniversary.

Inaugurating the project, Delta State Governor and Vice-Presidential Candidate of the Peoples Democratic Party, PDP, Dr. Ifeanyi Okowa who was accompanied by the immediate past Governor of Cross River State Liyel Imoke, lauded the courage and ingenuity of Akwa Ibom State Governor, Mr. Udom Emmanuel, in embarking on such a humongous project.

Drawing from his experience on a similar project, Okowa asserted that the amount of money sunk into the project, if used for road construction, could deliver several kilometers of road that would attract a lot of praises and applauses.

He therefore commended Governor Emmanuel for the passion and selflessness exhibited in undertaking the drainage project and for the 10 portable water schemes for communities whose water sources were affected by the project, saying that such passion is indicative of the hallmark of a leader that cares for its people.

He lauded the people of the state for standing by Governor Emmanuel in his seven years of leadership in the state.

“There is a project that is lasting and impactful and only great men can do such projects because they think about today and the future.

“If he was thinking about today only, he would rather push that money into doing several kilometers of road, but he looked into the future and to conquer the future for the people of Akwa Ibom, he undertook this project.

“Only a bold, courageous and caring leader will do this kind of project”, Okowa stated.

“I want to appreciate you my brother for this great thing that you have done for your people and I know that by the special grace of God, there’s a lot more for you to do not only for Akwa Ibom but for our nation Nigeria. As Chairman of the Presidential Campaign Council, the governor of Akwa Ibom State, I’m very sure, is capable, courageous and knowledgeable to lead the PDP to victory in 2023”, he added.

The Vice Presidential hopeful described Governor Emmanuel as one who thinks and does big things, expressing his delight to associate with him.

“I’m glad to be his friend. I’m glad to be associated with a man who thinks big and is able to execute projects the way they ought to be executed and with what I see here today, he will also help to export this kind of thought and boldness and courage to Nigeria”.

The host governor, Mr. Udom Emmanuel, explained that the State Government and World Bank collaborative project, through the Nigeria Erosion and Watershed Management Project, NEWMAP, was meant to provide a permanent and comprehensive solution to the decades-long problem that has barred the IBB Avenue, it’s adjourning streets, surrounding communities from socioeconomic advantage and appreciated all the partners involved in the project and the cooperation of the communities during the work.

The National Project Coordinator of NEWMAP, Dr. Salihu Dahiru, commended the Udom Emmanuel led government for being outstandingly committed to the development of his state.

He said the IBB project was the largest undertaken by NEWMAP across the nation and that Akwa Ibom emerged the best in counterpart funding and other NEWMAP indices across the country.

Presenting an overview of the project, the Commissioner for Environment and Solid Mineral, Mr. Charles Udoh, said the design provides for drainage channels to form a canal to convey storm water in the entire catchment area of 8.4Km, with reinforced outfall drains of 0.3Km and 0.6Km of Gabion/Reno mattresses.

These, he added, are accompanied by about 1Km grass channel, 15 road crossing culverts, 2 stream crossings at downstream areas, 10 mini water schemes, perimeter fencing/guard rails at open drain sections among others.

Paramount Ruler of Uyo, Edidem Sylvanus Okon, speaking on behalf of residents of the benefitting communities, thanked Governor Emmanuel for embarking on the project, noting that residents of the area hitherto displaced by the erosion have now returned to their houses.