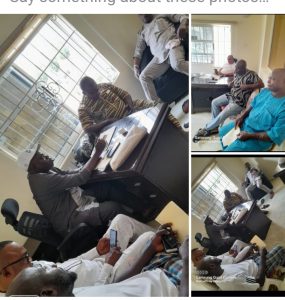 The Committee on Intra/Inter Party affairs under the PDP Akure Group 2023/24 for Atiku/Okowa campaign Committee has begun moves to reconcile all aggrieved members of the party in Akure South local government.

Recall that crisis started in the party in Akure South local government shortly after the primary elections for House of Representatives and House of Assembly on May 22, 2022.

However, the main crisis had started immediately Barrister Olumuyiwa Adu emerged as the candidate of the party for the February by-election of Akure South Federal Constituency. The vacuum was created by the demise of the late Rt. Hon. Adedayo Omolafe Expensive.

Speaking at the strategic meeting of the committee on Tuesday at the campaign office of Atiku/Okowa in Akure, chairman of the committee, Apostle Kehinde Omoniyi stressed the need for all the members of the party that are aggrieved to be reconciled so that the party can have an easy ride in the next year general elections.

Appreciating the opportunity given to the committee by the leadership of Akure Group 2023/24, Apostle Kehinde Omoniyi noted that members must do all they can to package and promote the interest of the party by bringing back those that are aggrieved.

He also said that apart from talking to members of the PDP that are aggrieved for one reason or the other, the chairman made it known that it’s also the duty of the committee to talk to members of other party who wish to decamp to PDP.

He added that doing this will help the party to face the ruling APC in Ondo state in the next general elections.

He also stated the importance of Atiku presidency, saying that he is the only man that can rescue Nigeria from the current government of the APC which he said had no good plan for the country.

He noted that the present APC government had failed to embrace policies that can reposition the country.

Omoniyi berated the hunger insecurity and high cost of living under Buhari’s administration, saying that it’s the duty of members of the committee to ensure that they preach the changes which only Atiku can effect to Nigerians.

“Let’s also spread this good news to PDP members who are aggrieved and want to defect to another party. Let’s also preach it to those who want to decent to the PDP from other parties. Anyone that has a voters card is very important to the party as we need people like that to win the election” he said.

He said: “We will meet with the aggrieved members to know why they are aggrieved and find a solution to it and make peace with them and get then back to the party. Aggrieved members of other political parties should not be neglected. They should be canvassed with Atiku’s cardinal agenda.
We must canvassed with all the antecedence of Atiku which is his ability to stabilize the economy during his reign as vice to Obasanjo, and his contributions to education sector yielded success”

In their separate speeches, Olufemi Ajibola, Femi Adepoju, Olawole Omojagbe and Jayeobe Ogunmola said that everyone in the street of Akure feels the hit Akeredolu’s administration and they are ready to work for the victory of PDP.

They said the need for PDP to win the elections at all levels is a reason everyone in the committee should ensure that they all go out to identify those that are genuinely aggrieved.