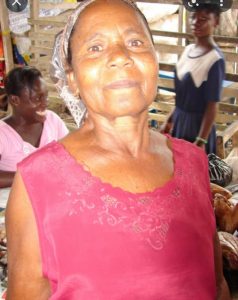 A 67 years old woman, Ologbenla Kikelomo, was two weeks ago murdered at her residence on No. 67, Prince Ola Street in Egbeda area of Lagos state by suspected thugs working for Alhaji Musiliu Akinsanya popularly known as MC Oluomo over the ongoing leadership tussle in the state drivers union.

The murdered Ologbenla Kikelomo was the mother of Ikeade Ologbenla, wife of late Taiwo Ogunlaja known as Taye Alakan, the slain drivers union officer who was killed during a bloody riot on January 21 this year.

Recall that Taiwo Ogunlaja, former NURTW Branch chairman of Idumota/Egbeda in Lagos state and also a chieftain of the People’s Democratic Party, was shot by MC Oluomo’s thugs during a clash which took place at his branch office.

Meanwhile, our reporter who visited the scene of the crime where Ologbenla Kikelomo was shot by the assassins on Monday gathered from her neighbours that the killers were shouting on top of their voices, asking for the whereabout of her daughter, Ikeade, wife of the Egbeda branch chairman of NURTW who was murdered in January, this year.

“It was when she couldn’t give an account of her daughter’s whereabout that the assassins fired a gun shot at her” one of her neighbours who didn’t want to be mentioned said.

A younger sister to the late Kikelomo who preferred not to be mentioned for safety purpose said that Ikeade’s life has been under threats from MC Oluomo’s thugs since she reported the killing of her husband to the police and pinned the allegation on him (Oluomo).