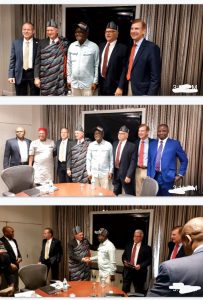 Benue State women and youth are to benefit from training in agribusiness in the State of Virginia, United States of America.

This understanding was reached following a proposal by the State Governor, Samuel Ortom that Virginia State which shares a lot in common with Benue should invest in the Nigerian state for obvious mutual benefits.

The understanding followed an interactive session between the Benue State Government led by Governor Ortom at the investment forum organized by the International Commission on Nigeria which took place at the Sofitel Lafayette in Washington DC.

According to the Principal Special Assistant, PSA to the Governor on Diaspora Affairs, Rev. Peters Ichull,
the discussion focused on promoting agriculture, training and trade between the two states.

Governor Ortom emphasized that since the state of Virginia was also the food basket of America, the two states should explore the similarities to boost agribusiness.

The governor said Benue stands to benefit from the advanced technology and skills of Virginia.

Responding, Virginia’s Commissioner for Agriculture, Dr Guthrie agreed that the collaboration between Benue and his State was feasible because of their shared interests.

He emphasized that, helping the youth and women to cultivate interest in agriculture as a business will address both poverty and food security that have become global
concerns.

The Commissioner said youth and women involvement in agriculture through training, extension and research will shift global attention to Africa as the continent is the most resourceful in the world.

According to Dr Guthrie, “with enhanced agriculture in Benue, the state can produce what Virginia and even other parts of the world can buy.”

He then proposed three approaches to address Benue’s search for expansive agriculture which includes education, extension, and research, insisting that Abraham Lincoln who was also from the state of Virginia introduced the three-pronged approach that has given the state its lead in agriculture.