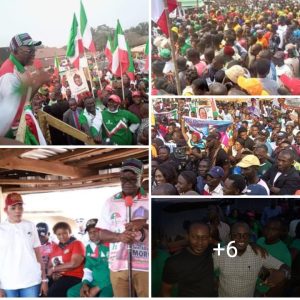 There were more blessings from traditional and religious leaders for the governorship ambition of Engr. Titus Uba as the Peoples Democratic Party, PDP continued its statewide campaign tour in Benue South Senatorial district ahead of the March 11th general election.

Traditional and religious leaders in Ado, Okpokwu and Ogbadibo Local Government Areas Friday January 20th, 2023 gave their blessings to the party’s candidates presented to them by Governor Samuel Ortom.

They unanimously said that given the cordial working relationship that has existed between the administration of Governor Ortom, the traditional institutions and the church, they had no doubt to endorse the candidature of Engr. Titus Uba and others he had presented to them.

In their separate remarks, the Ada Ado, HRH Chief Michael Onazi and Ada Ogbadibo, HRH Chief Emmanuel Odeh and Chief Ojo Ochechema applauded Governor Ortom for restoring the dignity of the traditional institution under his administration, by the priority given to their welfare and prompt payment of their emoluments.

They gave assurances to continue standing by Governor Ortom’s administration and everyone that he presents to them for the forthcoming elections, believing that he will sustain the good policies and programmes he has put in place particularly in the area of ensuring security for the protection of lives and property of the people.

Also speaking, some of the religious leaders, amongst them, Rt. Rev. Gabriel Owoicho Adoyi and Bishop Peter Ikwulono of Methodist Dioceses expressed appreciation to Governor Ortom for always carrying the Christian community along at all times, stating that “The candidates you have presented today, we will also accept them.”

Governor Ortom who is leader of PDP in the state had, while presenting the governorship candidate, Engr. Uba and the various National and State Assembly candidates also took time to explain to the people of Ado/Okpokwu/Ogbadibo Federal Constituency the circumstances surrounding legal battle for reps ticket between the incumbent, Dr. Ottah Francis Agbo and Barr. Aida Nath-Ogwuche who was earlier declared winner.

Sensing the tension that was building between supporters of the two PDP stalwarts at the rallies, Governor told the teeming party’s faithful that until determined otherwise by the Apex court, the legal candidate for the Enone Federal Constituency seat was Dr. Agbo who was being challenged by Barr. Nath-Ogwuche at the Supreme Court.

Ortom however advised both Dr. Agbo and Barr. Nath-Ogwuche to work together as they canvass support for the party’s victory, urging them not to allow rancour among their supporters until the final determination of the suit by the Supreme Court.

PDP governorship candidate and Speaker of the State Assembly, Rt. Hon. Uba in his remarks, expressed appreciation to the traditional and religious leaders for their prayers, promising to sustain the partnership Governor Ortom has built with the Church and the traditional institution when he is elected as governor.

Senator representing Benue South, Comrade Abba Moro who is also the PDP Senatorial candidate in the zone, Deputy Governorship candidate of the party, Sir John Ngbede all urged party supporters to keep faith with the party and vote for its candidates.

The Acting State Chairman of PDP, Hon. Isaac Mffo sued for unity of the party in the zone, while Director of Campaign Management Committee, Dr. Cletus Tyokyaa reaffirmed that the party had a balanced team of candidates who were conversant with governance.

Party chieftains who spoke separately at the rallies included Stephen Onmenje, Ekpe Ogbu, Obande Itodo, Tony Onuh, Godwin Adah among others who also reaffirmed their support for the party, pledging to work for its victory.