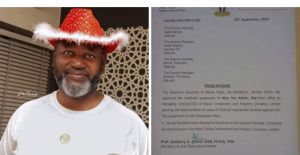 Benue state governor, Chief Samuel Ortom, has demonstrated his resolve to expose and curb corruption in the state by suspending the Managing Director of the Benue State Investment and Property Company Limited, Mr. Alex Adum, over his roles in corruption at the agency.

A press statement by the Secretary to the State government, Mr. Tony Ijohor SAN, stated that Governor Samuel Ortom approved Adum’s Indefinite suspension from office as BIPC boss pending the determination of cases of financial impropriety levelled against him.

Adum who was being refered to as a corrupt public officer by staff of the agency who spoke to our reporter will proceed on the suspension with immediate effect.