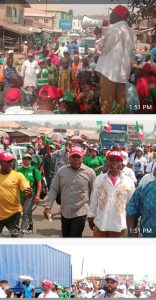 The Akure South campaigns Committee for Atiku/Okowa today flagged-off its campaigns for the presidential candidate of the party, Alhaji Abubakar Atiku and all other candidates of the party in the local government ahead the forthcoming general elections. 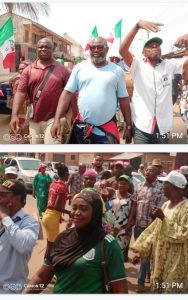 Addressing thousands of PDP members and supporters at the flag-off this afternoon, the Co-ordinator of Atiku/Okowa campaign Committee in Akure South, Hon. Prince Tony Ala urged the attendees to return back to their respective Poling Units to ensure that all the party’s candidates win at the February and March, 2023 elections. 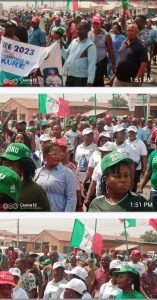 The Co-ordinator continued that there is no division in PDP in Akure South as being rumoured by the “enemies of progress”, adding that all the candidates in the party in Akure including the presidential and senatorial candidates are eminently qualified for the positions they are vying for.

He challenged Nigerians to vote out APC, the party he accused of making life hard for citizens of the country. He said that the APC has ruined the economy of the country.

He expressed his displeasure over the high rates of commodities, fuel and food in the country, noting that Alhaji Abubakar Atiku being a seasoned administrator will return the old glory of the country if elected as president next month.

He also advised Nigerians not to sell their votes because of peanuts, saying that even though they collect money from the APC, they should still go ahead and vote for Alhaji Abubakar Atiku, Ifedayo Adedipe SAN, Princess Kemisola Adesanya, Hon Olajide Oguntodu and Hon Adeolu Adeniran ADX because they know what it takes to bring development to Akure, Ondo state and Nigeria.