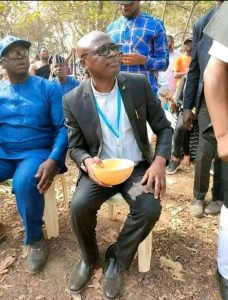 Akase who described Alia as an apostate priest in a press statement he issued this morning added that the disputed governorship candidate is playing to the gallery to curry favour.

The self-acclaimed ‘messiah’ of All Progressives Congress, APC who is the disputed candidate of the party in Benue State, Hyacinth Alia has continued to prove that he is not prepared to challenge the Peoples Democratic Party, PDP for the 2023 governorship seat. His obsession with Governor Samuel Ortom and his administration is not only ridiculous but also smacks of one who has zero understanding of the workings of government, but is living under the delusion that pulpit popularity will translate to ballot acceptability.

If the APC in Benue State wanted to choose a priest to fly its governorship flag in the 2023 elections, they would have gone for a priest with the pedigree of development and one who truly cares about the people. There are many priests from Vandeikya who are reputed for development and have made tangible contributions to the churches where they served, yet, such priests do not trumpet their selfless services to the society and also do not call themselves ‘saviours’ of the people.

Alia’s latest outing against the Ortom administration was contained in a puerile and error-laden statement signed by the Head of Communications of his campaign organization, yesterday. The suspended priest, apparently playing to the gallery, sent pretentious sympathies to those he referred to as “suffering Benue pensioners and civil servants” over what he termed “insensitivity on the part of government.”

The statement was another theatric of a conman couched in deceit and treachery with the sole intention of inciting our respected senior citizens and hard working civil servants against the Benue State Government, which has continued to prioritize the welfare of its workforce and retirees despite the challenging economic situation that is a huge burden on states across the country.

Alia made unfounded claims that the State Government is “insensitive” and is treating civil servants and retirees “like slaves” when, with meagre available resources occasioned by harsh economic realities, the Benue State Government under Governor Ortom has been making relentless efforts to pay workers emoluments and pensions.

It is now crystal clear that the renegade priest and his band of APC jingoists are the ones sponsoring protests against the Ortom administration to score cheap political goals. Here is a priest who could not construct just one toilet and did not build a single block for any of the churches where he served, but is now grandstanding about good governance. Alia took part in a fraudulent governorship primary election that the APC in Benue State forged results in his favour, yet he came out to describe the election as credible and transparent. He lacks the moral ground to criticize anyone on account of governance.

We are not surprised that Alia who abandoned his priestly vocation for partisan politics and rightly got suspended has feigned ignorance of the measures taken by the present administration to address the welfare of the workers and retirees. Only a man who genuinely cares about the welfare of the senior citizens will understand and appreciate what the State Government has done in the face of the general economic downturn in the country. The State Government has been discussing with labour unions and the leadership of pensioners and they all know precisely how much the government receives as federal allocations and what is generated internally. It is the first time in Benue that labour unions and retirees have been involved in the administration of resources of the state.

Despite the paucity of funds, Governor Ortom is working assiduously to clear outstanding salaries, and with the domestication of the PENCOM law, the Benue State Government has already contributed over five billion naira to address the challenge of pensions in the near future. This is also the first time in Benue State that the government has made the level of efforts that the present administration has put into clearing pensions. This administration inherited pension and salary arrears of N70 billion, but has drastically reduced it to just above N30 billion. The Governor has been paying pensioners, despite the lean resources.

The sanctimonious posturing and hypocrisy of the priest who rebelled against the Church to participate in partisan politics have never prompted him to tell Benue people how he will improve the internally generated revenue of the state. He only talks about spending money. He repeatedly blames the government but proffers no solutions to the challenges of development. It is a mere desperation to have access to the state coffers and fleece the people’s till for personal aggrandizement.

The suspended priest turned accidental politician is not aware that the Federal Government under APC on whose platform he is craving for Benue’s top job and other APC states are also facing intractable issues of pensions and salaries. The APC government at the centre has been borrowing trillions of naira to offset the wage burden.

If indeed he cares about Benue workers and pensioners, he and his supporters ought to cover their faces in shame for openly celebrating the victimization of Benue State when the APC-led Federal Government recently blocked the state from accessing N41 billion bond approved by the State Assembly for the purpose of clearing arrears of pensions and salaries.

Since Alia proclaims love and care for Benue pensioners and civil servants, we challenge him to publish the list of retirees he has assisted as a compassionate priest would do. He has never visited any of the IDP camps in Benue State, even to pray for them.

Parading a pseudo life of integrity in politics does not win votes. Alia is on record to have failed woefully in his priestly vocation and will be a catastrophe in political leadership as well.